Michael Zeller, a BCB student, working with Phillip Gauger, VDPAM,  and Amy Vincent, USDA, has won the Oral Presentation award at a national conference, AAVLD, the American Association of Veterinary Laboratory Diagnosticians.  The conference was held in San Diego in mid-October.

The conference provides a venue to share diagnostic scientific information, enable discussions regarding foreign animal diseases, and create committees that are responsible for oversight of different areas of diagnostic tests.  Finally it provides an accreditation board for all veterinary diagnostic labs in the nation.

Michael presented: Human to Swine transmission of novel H3 Influenza A Viruses from 2010 to 2017.  His abstract follows.  Congratulations, Michael 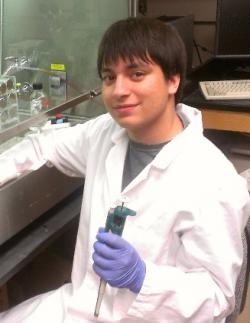 ABSTRACT:  Influenza A Virus (IAV) is a common cause of severe respiratory disease in swine (IAV-S). The combined effects of antigenic drift and antigenic shift makes influenza a moving target, requiring vaccines to be updated in order to be effective. Further complicating the IAV-S epidemiology is the broad host range making swine populations susceptible to IAVs from other species including human-origin IAV.

Control of IAV in the human population may be a potential method to prevent spillover events into swine. When spillover events do occur, swine can be a dead-end host, or a combination of genetic and environmental factors may allow a particular IAV to adapt and persist in swine. To search for possible H3 spillover events from humans to swine, 1,032 H3 hemagglutinin (HA) sequences generated from diagnostic submissions to the Iowa State University Veterinary Diagnostic Laboratory (ISU VDL) from 2010 to April 2017 were analyzed. In addition, 41 human reference vaccine sequences and 1,000 randomly selected human-origin IAV in the United States from 2010-2017 were included for analyses. A total of 2,073 H3 sequences were aligned with MAFFT, and ISU VDL sequences that contained insertions or deletions representing less than 95% of the HA sequence were removed. A maximum likelihood tree following a general time-reversible substitution model with gamma distributed rate variation was constructed from the alignment using FastTree.

We identified six unique transmission events from humans to swine that occurred from 2010 to 2017. The earliest of these spillover events was first detected in 2012, and has become established as a new human-like H3 clade in swine, with a total of 180 sequences to date detected in samples submitted from Illinois, Indiana, Iowa, Minnesota, Missouri, Montana, North Carolina, Ohio, and Oklahoma. Prior phylogenetic analysis by Rajão et al. 2015, based on the HA gene, indicates that this IAV is most closely related to the 2012-2013 WHO designated vaccine strain A/Victoria/361/2011. Events 2 and 3 were detected in 2013, each a single separate event, but did not persist in the swine population. Spillover events 4 and 5 were detected in 2016, and it remains to be seen if these transmission events are sustained in the pig population. The 6th event resulted in four genetically similar H3N2 IAV-S observed from early May to late April of 2017 from a farm in Oklahoma. An additional closely related case was reported from a farm in Indiana. Phylogenetic analysis of the HA gene indicates this IAV is most closely related to the human-seasonal strains circulating in 2016-2017, and similar to the WHO designated vaccine strain A/Victoria/673/2014 recommended for the 2017-2018 influenza season.

These novel HAs may reassort with endemic lineages further affecting transmission, although it remains to be seen if spillover events 2-6 become an established clade in the swine population similar to the first 2012 human-like H3.